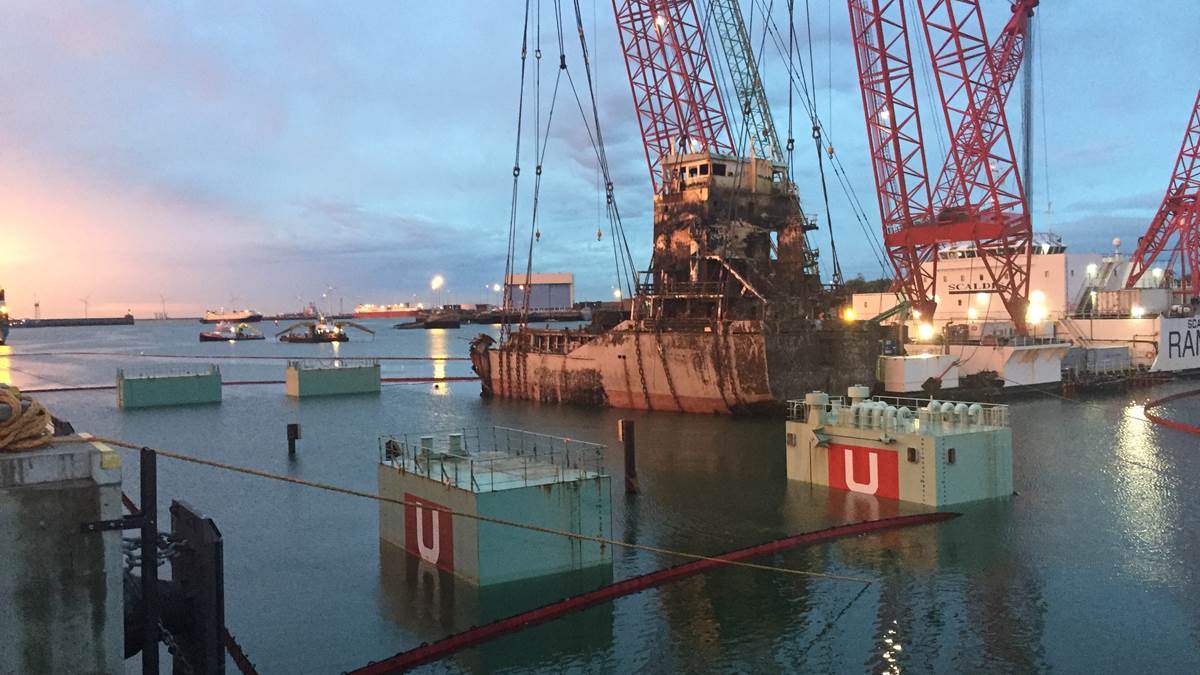 The  Dutch freighter “Flinterstar” collided nearly head on with the Marshall Island-flagged LNG carrier “Al-Oraiq” in the North Sea off Belgium in October 2015.

All 12 crew members from the freighter were rescued.

The “Flinterstar” partially sunk, resting on a sandbank in calm seas and clear visibility.

The 122,000 DWT “Al-Oraiq” was also damaged, but was able to continue to its destination Zeebrugge, Belgium with the help of a tug.

The 129 meter “Flinterstar” was built in 2002 and is flagged in the Netherlands. The vessel had just departed Antwerp bound for Bilbao, Spain when it collided with the “Al Oraiq” about 6 miles (10 km) from the coast.

During 2016 the ship broke in two pieces.

Scaldis was awarded the rescue operation.
The forepart was lifted by their crane vessel Rambiz and positioned onto the Ugland barge “UR93”, and the barge was thereafter towed to Gent where the wreck was scrapped.

Due to the uncertainty about the weight of the aft part, it was decided to use a submersible barge to bring the wreck out of the water. The Ugland barge “UR93” was chartered for this operation.
The submersible operation took place in the port of Zeebrugge on 3rd September. 2016.

Transportation of ITS structures

Port to port delivery of substructures for Snorre Expantion Project
/ Read more
Transportation of ITS structures
07.08.2019 08:57

After the HLV Uglen installed the Njord A derrick more than 20 years ago, we have again installed the derrick of Njord A
/ Read more
HLV Uglen - Njord A Future Project
18.07.2019 13:19

Our Gdansk based barge, UR5, in operation for transport of 1680t hull
/ Read more
UR5 used for roll-on / roll-off operations in Gdynia for Karstensens
/ Archive
News